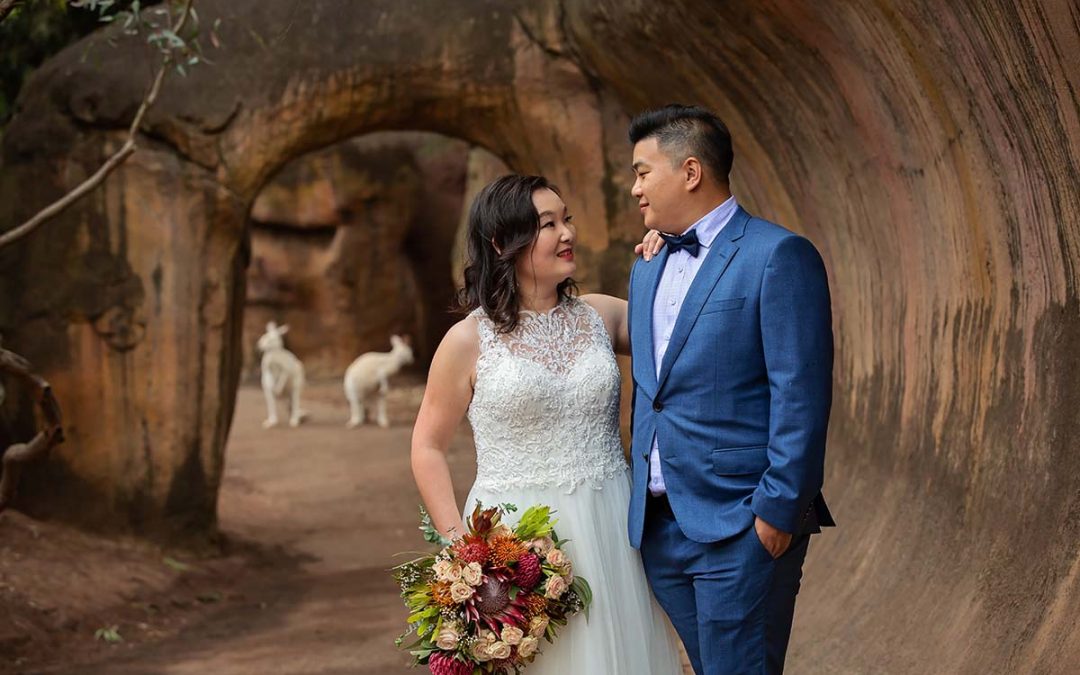 I met Fay and Edward by referral from Brett at The British Wedding Car Co. It’s a great feeling to have another wedding vendor refer a couple for wedding photography.

When I met Fay and Edwards they were down to earth and so easy going. I loved hearing their plans for a Perth Zoo wedding.

Fay and Edward had family come from overseas to attend their wedding.

Not only did their most beloved human family attend their wedding, they also chose to include their furbaby Bella and Bella’s best buddy, Rocky in the bridal party.

Images with Bella were important to my bride and groom so they chose to do their bridal party photos before the wedding ceremony at Hyde Park WA with Bella.

The BWC Co drove Fay and Edward safely to the ceremony in style in a stunning Jaguar called Mary! We love Mary’s red leather interior.

Bella was not excluded from the ceremony, the couple had a cardboard life size cut out of Bella so she could be there. Check her out getting in on an image of the couple’s first kiss.

We loved the bride and grooms quirky sense of humour with animal ears worn during the ceremony.

We have mentioned celebrant Andrew Murfin in previous blog posts but there is another reason we love him! He adorned animal ears during the ceremony too! Andrew always brings a sense of fun to ceremony’s. His professionalism is evident with the number of ceremonies he performs.

After the ceremony the heavens opened and bought some good luck rain to Fay and Edwards wedding day.

We spent some time at Perth Zoo capturing some memories in the couple’s favourite locations. We had a pair of white kangaroos pose perfectly for us and captured some romantic images on the Perth Zoo’s Iconic Carousel.

It was a quick trip to Crown to capture a couple of Crown images and this is where we left our newlyweds to enjoy their first meal and celebrations as husband and wife.